MANGROVE education and training is underway on Grand Bahama for about 30 participants at the Rand Nature Center as part of a major mangrove restoration project by Waterkeepers Bahamas and Earthcare Bahamas.

The project – which aims to restore the mangrove forests of Dover Sound – is funded by a grant from the Bahamas Protected Areas Fund. The goal is to harvest and plant 30,000 mangrove propagules.

The Mangrove Action Project (MAP), a well-known international mangrove conservation group, was brought in to conduct appropriate education and training for a week, which began on Monday. This is to ensure the success of the restoration of the mangrove.

According to Rashema Ingraham, Executive Director of Waterkeepers Bahamas, the mangrove restoration project with Earthcare Bahamas will be carried out using a phased approach.

She said: “The first phase of this project is 12 months, and it’s funded by the Bahamas Protected Areas Fund, and that’s where we’re looking at collecting 30,000 (mangrove propagules). But we know that more than 40,000 hectares of mangroves were destroyed during Hurricane Dorian. And so when you think of the timeline, it’s not a one-year project, it’s a phased project that will last over five years. 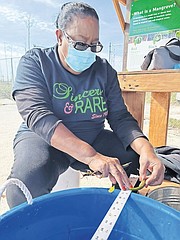 Ms Ingraham said they had started inviting volunteers, including nine from the Pi Upsilon Omega chapter of Alpha Kappa Alpha Sorority Inc and four from Earthcare, to help with the potting process. She indicated that to date they have nearly 3,000 propagules in their nursery at Coral Vita which are closely monitored.

“Volunteers help us reach our numbers. On Saturday we potted around 300 propagules and before we potted them we had just over 2,500 in the nursery,” she said.

She said an extended training program for the mangrove restoration project is being organized by MAP and will continue until Thursday at the Rand Nature Center from 9 a.m. to 3 p.m.

“They will help us think beyond what we do for restoration in the country,” she said. “We are delighted that more than 30 people have registered to participate in this training.”

Ms Ingraham said the planting of the mangrove propagules is planned for the fall of 2022. the year.”

Alfredo Quarto, co-founder of MAP, said training and education are important to ensure long-term restoration success. He reported that there is a 70-80% failure rate in restore attempts.

“The loss of mangroves from the hurricane is something we can’t really stop, but we can try to stop the wrong restoration approach that is causing failures if plantings are in the wrong place. We try to educate people on the signs of suitable places to plant and methods of restoring mangroves so that there is long-term success.

“We know there are a lot of problems with mangrove loss that people are tackling with the wrong approaches, and we’re trying to avoid that here, hopefully making it a process that helps restore a successful long-term approach.”

Mr Quarto said MAP was established in 1992 after seeing the problems of mangrove destruction for shrimp farming at that time in Thailand and other countries. “We formed MAP to address the issue of loss of mangrove forest. We are actively engaged in mangrove conservation and restoration and education work. But since then we have expanded it more in a sense of education and restoration now.

Laura Michie of MAP said the four-day training workshop includes field trips so participants can observe mangroves and biodiversity. “They will look at different tree species and their importance; what has been lost and how we can restore it; water flow and soil; and plant new species. We improve participants’ knowledge of mangrove ecology, biology and a little history of mangroves, we teach them the right techniques and best practices for the restoration of mangroves.

Ms Michie said 70% of Britain’s mangroves were destroyed by Hurricane Dorian in 2019. “We know how important mangrove systems are to ecosystems, coastal erosions and fisheries, a- she declared. We work here with Earthcare and Waterkeepers to help them restore the mangrove forests. It’s really important to us, and we’ve worked all over the world with many different groups, NGOs, communities, governments, scientists, and many groups that want to restore their mangrove forests.

Gail Woon, founder of Earthcare Bahamas, said the training was an “eye-opening” experience.

“What we learned yesterday was an eye opener because some of the techniques that we were going to do, we find out that they would be bad and would only depend on one species. And finding out if we don’t choose the site, the put in the right place, it’s doomed. So this training is so important. By the end of this one, we’ll probably rethink our plans for the future. We were going with what we thought would work, and we found out that some of the strategies weren’t so great, so it’s great that the prospect for this project is much higher now that MAP has come to enlighten us with all of their experience.

Ms Ingraham said community involvement is also important to the success of a restoration project. Pi Upsilon Omega president Yvonne Pearson said repotting the mangroves was a great experience. “I think this is something that our young people in particular should have the opportunity to participate in. We are more than happy to help by measuring the mangrove propagules, repotting them and watering them for restoration of our mangrove forests,” she said.

Richeena Campbell, Senior Vice President, said, “Service is at the heart of our organization, and what better way to serve our community than to protect our land and our country. Goal five of our sorority’s program is global impact, where we partner with local organizations to have national and international influence. Waterkeepers Bahamas has made monumental contributions to initiatives to build and rebuild our environment. The ladies of the Pi Upsilon Omega chapter get their hands on the floor. We have worked to protect our habitat by planting and repotting mangroves one by one to create better land for generations to come,” she said.

South Korea saw its foreign population shrink by 3.2% in November last year from the previous year, the first such decline at least since 2006 as part of the COVID-19 pandemic , announced Tuesday the Ministry of the Interior. According to a report by the Ministry of Interior and Security, the number of foreign residents, […]

New pfk13 polymorphisms in the population of Plasmodium falciparum in Ghana

Malaria remains a challenge in Africa, where an estimated 94% of global malaria-related morbidity and mortality occurs1. The most virulent malaria parasite, Plasmodium falciparum is resistant to most antimalarials. In order to slow the development of parasite resistance, the use of artemisinin-based combination therapy (ACT) has been introduced in malaria-endemic countries by the World Health […]